Finally, the e has landed!

Finally, the e has landed!

Received the keys today. Yeah! But also weird in this corona pandemic. I am still completely overwhelmed by all the technology. Will post more photos in the coming days, but have to read the manual first! 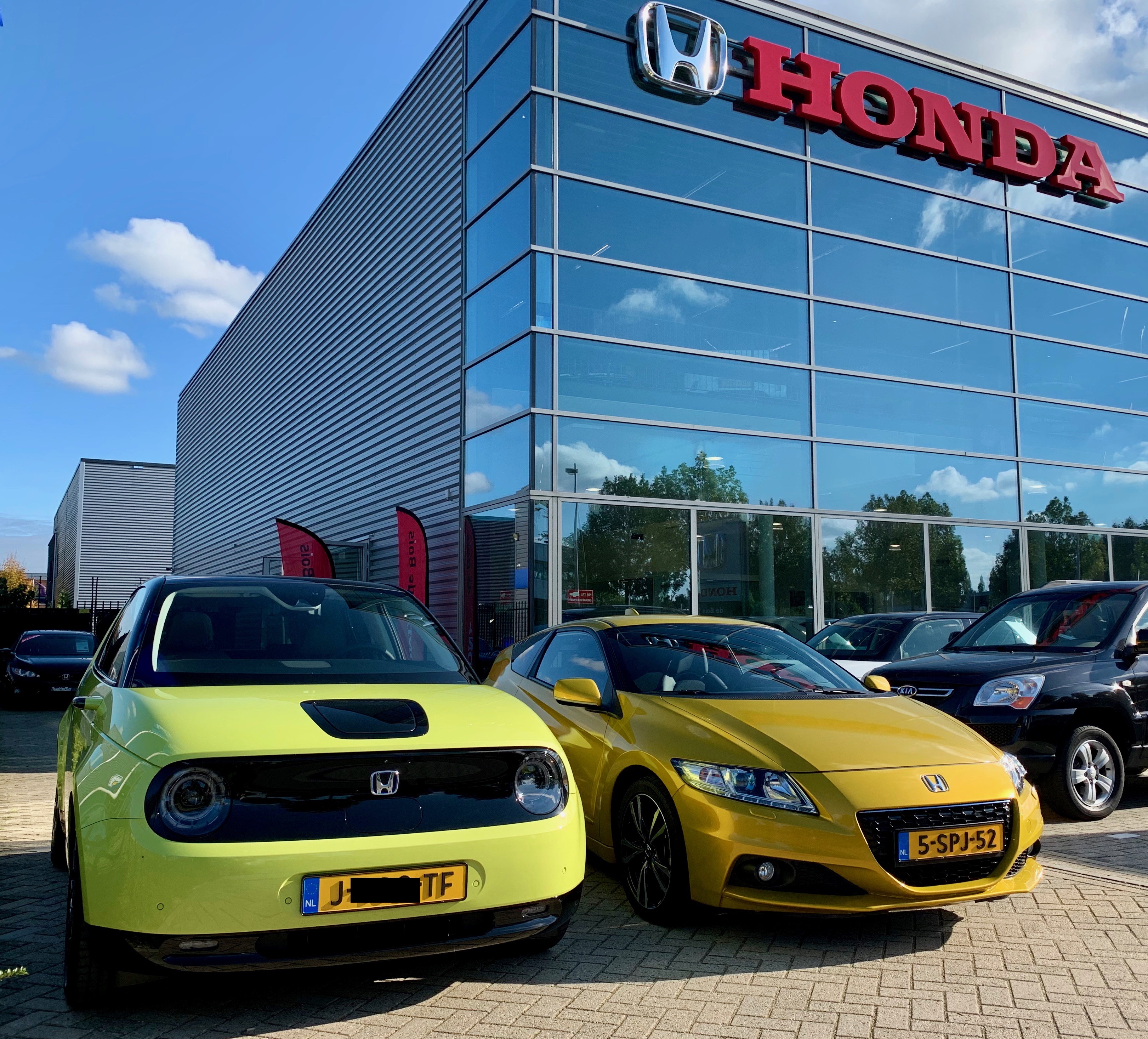 Congrats and have fun!
Top

You don't need to read the manual this site has its own version of Google, ask any daft question and Keithr pops up like magic with the page number in the manual and an image of said page.

iHansz wrote: ↑
Fri Oct 16, 2020 3:30 pm
Received the keys today. Yeah! But also weird in this corona pandemic. I am still completely overwhelmed by all the technology. Will post more photos in the coming days, but have to read the manual first!

Pleased for you iHansz. I still like the yellow, even if I was overruled by the rest of my family!

Thanks, thanks guys. Am still completely overwhelmed, still have to figure everything out. Tomorrow we will drive for a while and try e.g. out automatic parking.
Dutch Advance in Charge Yellow on 17"
1st registered Oct 2020
Home charger: public charging stations only
Top

Today we could drive for a while. What did I notice? If you have the car in "ready" and you are e.g. busy with the infotainment, the battery(?) makes a lot of noise. It looks like my old refrigerator. Compared to my previous car, the seats are placed (much?) too high and the seats are too short. Obviously this is not a car for very long distances. Honda Sensing works fine, but it is not perfect. Apple CarPlay works perfectly wireless and with Apple Music. Even Siri understands me flawlessly. I can't say anything about the power consumption yet, you can see the range decreasing quickly, but that could be due to my driving style. I always drove in my previous car in sports mode and did not pay attention to consumption. I also already hung it on the fast charger, from +/- 30% to 62% in 15 minutes and cost 4.90 euros. Overall I am very happy with the purchase! 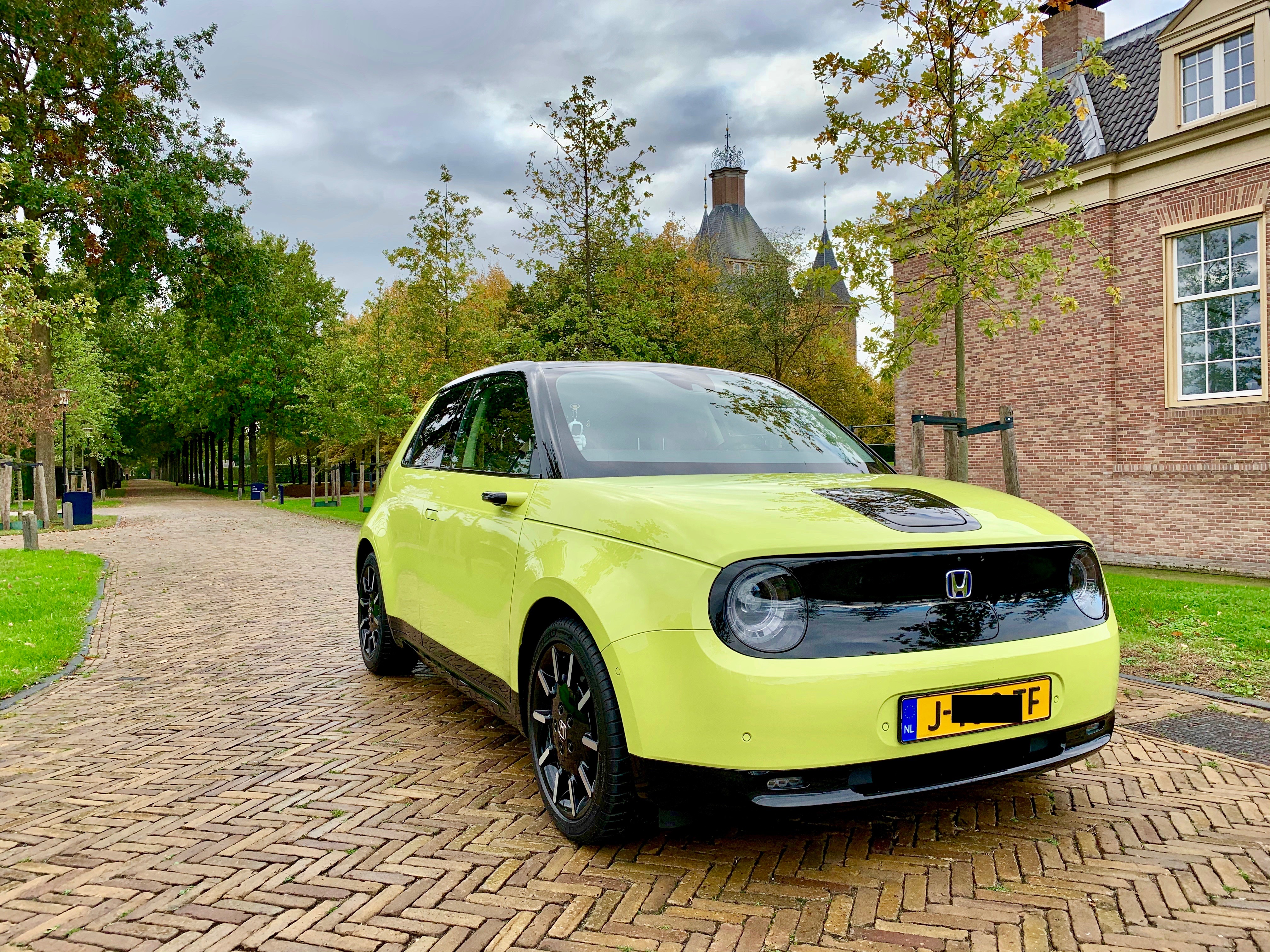 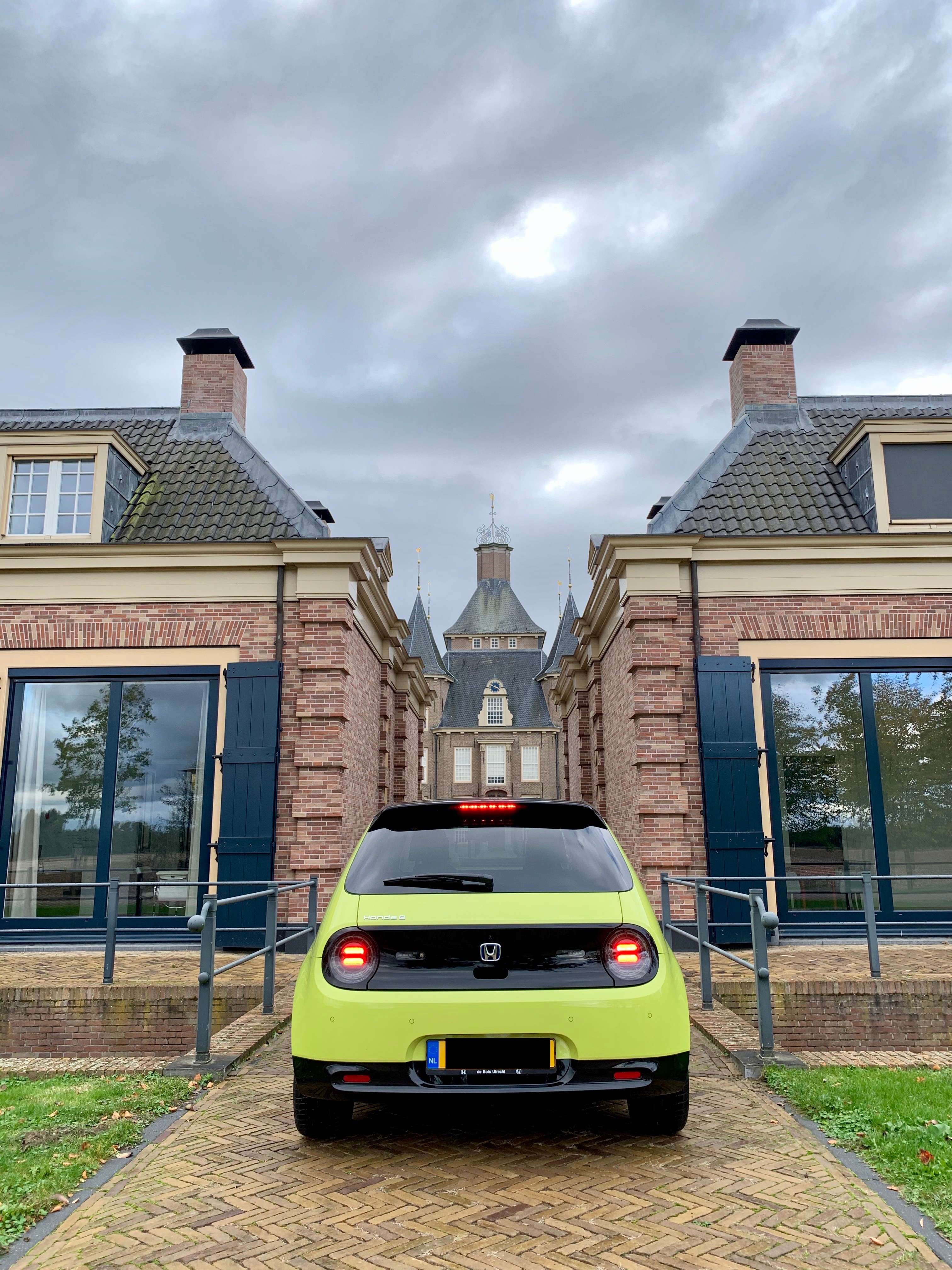 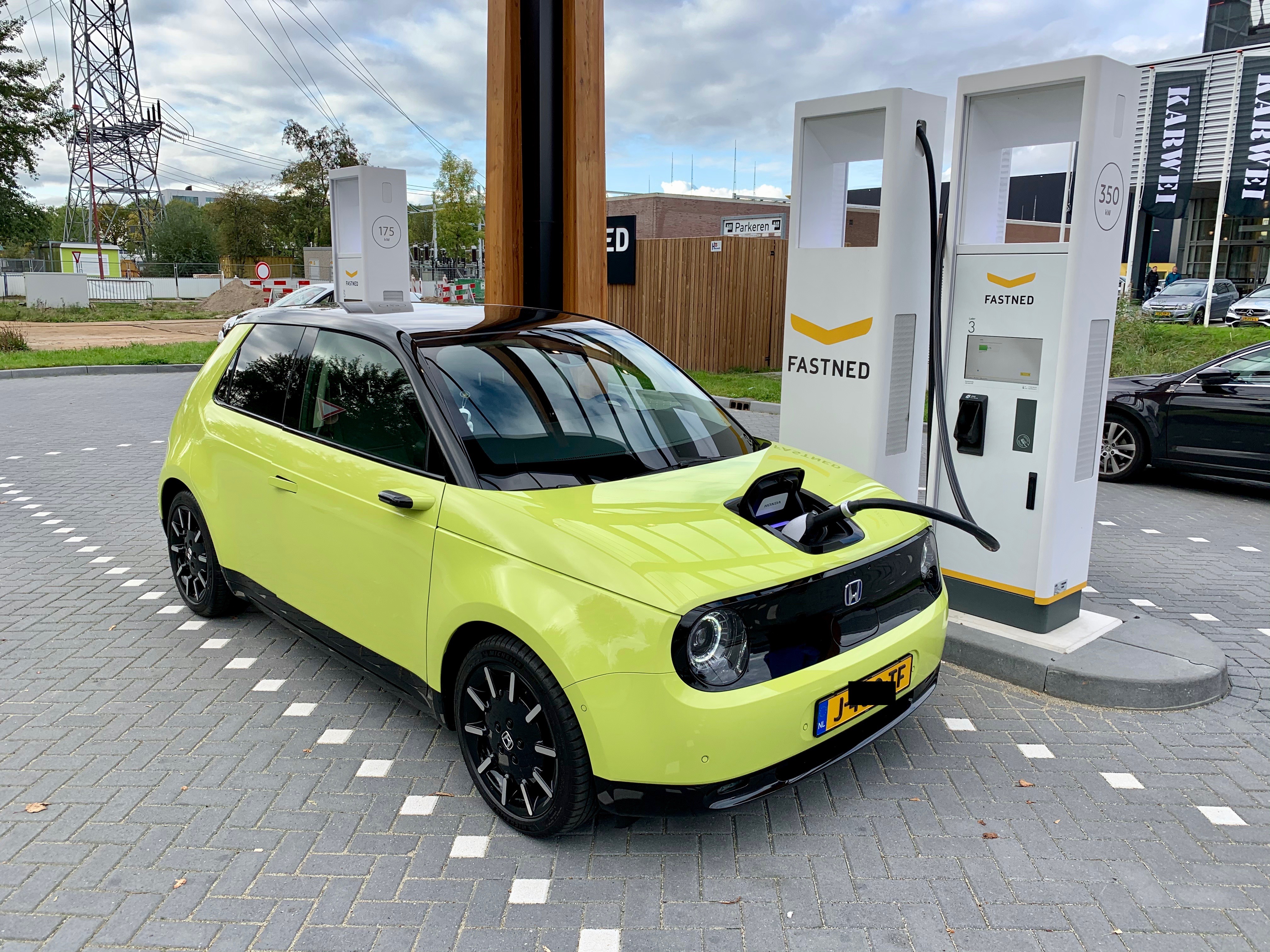 So, the first longer journey (about 300km vice versa) took place yesterday. Before I left, it had the e charged to 100%, the trip computer indicated 186km, so vice versa was definitely not going to work. When I turned on the heating it went off another 30km. It was about 4 degrees outside, I had to turn on the heating. So, extra top up at a fast charging station along the way, there are plenty of them along the motorways. On the way there, I arrived there with only 9% left.

Luckily it wasn't busy, and charging to 80% was relatively quick, took about 40 minutes, which I think is fine. The coffee there was nice. Because it was busy on the road, I did not use e.g. cruise control, etc., because the Dutch only have an eye for their phone while driving now, they swing over the road and drive at different speeds. Very annoying. With my previous Honda I always drove on the left and passed everyone, haha.

Now I drive on the right and everyone overtakes me ... Did not drive faster than 100 km/h. What I did notice is that the seats are not comfortable at longer distances. In my previous Hondas (Civic 8gen and CR-Z) the seats for real distances were much better. I also got tremendous cramps in my shin(!) by holding the accelerator in the position for 100 km/h. (for more than one hour). Never had it with previous cars, it was really very painful, in my opinion indicates that your foot has a strange position in relation to the accelerator pedal. On the way back also to a fast charging station, but everything was occupied there, except one with 350 kWh, but it did not want to provide the e with power.

So we had to wait until one with 50 kWh was released. All in all, the waiting and loading took about an hour. No problem, they had nice coffee and soggy sandwiches there.

Did use all electronic aids on the way back and I am very enthusiastic about that. The systems kept the e neatly between the road markings and bends were also inspected. If there was already a car, it was quiet because it was late in the evening and dark, in front of me, then speed was slowly reduced and when the car in front of me had disappeared (I was only driving 100 km/h), speed was resumed. I can't compare it to other brands, but I am positied surprised. When I arrived home I saw the trip computer indicated an average consumption of exactly 19 kWh per 100km, which in my opinion is great, given the outside temperature and the heating on (at 20 degrees and only 1 mark for the fan). My conclusion, Honda has to do something about the seating position, I am 1.86 m tall and have no extra long legs or so..., but position of foot and pedal turns out to be wrong with me. For the rest, you have to take some extra time for your trip, but that's no problem. But I'm be afraid that if more electric cars hit the road in the Netherlands, fast charging stations will be too few. (Fast charging cost me about 10 euros both times. Charging on the street for the same amount of kWh costs about 4 to 5 euros at a time.)

He just had to be on the other side of the charging station. 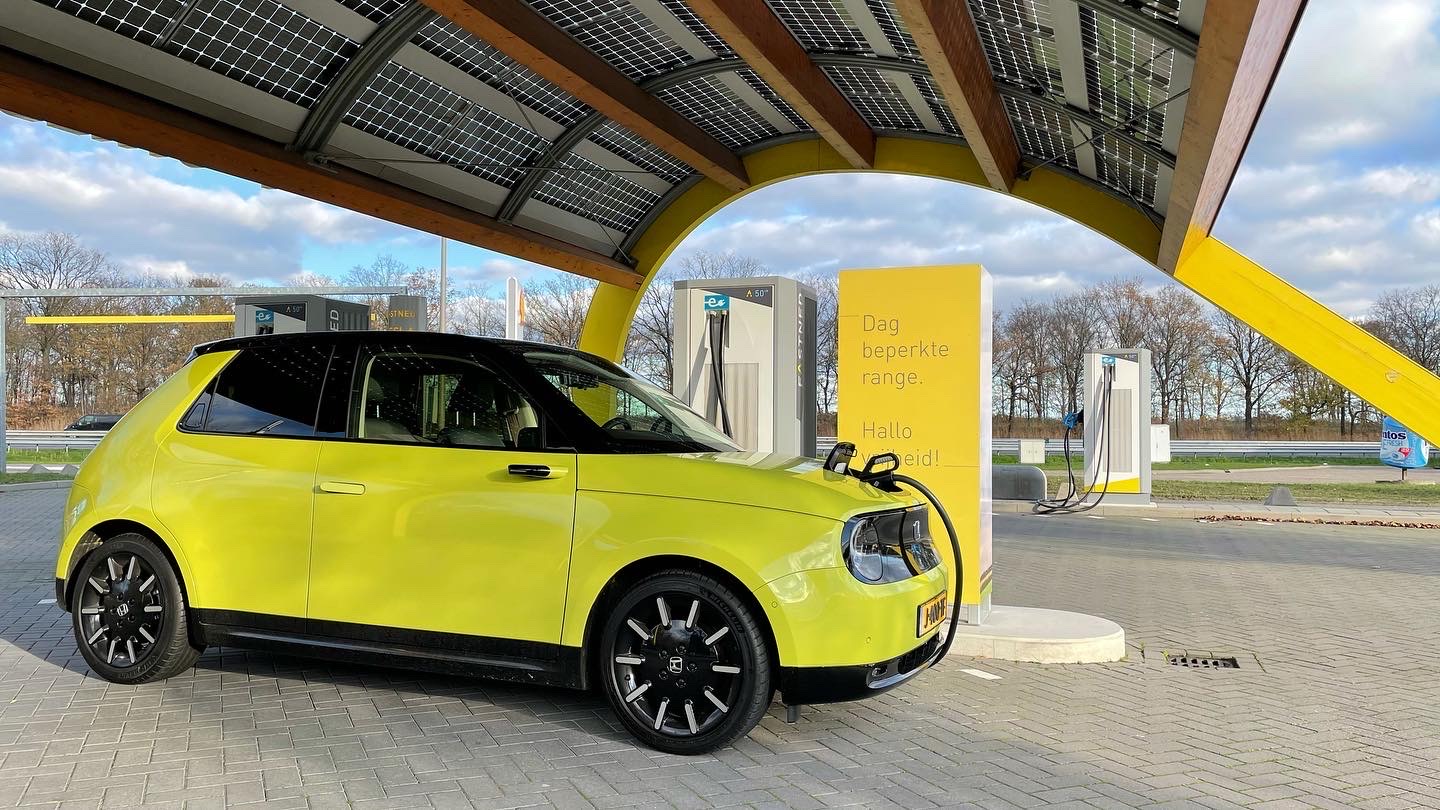 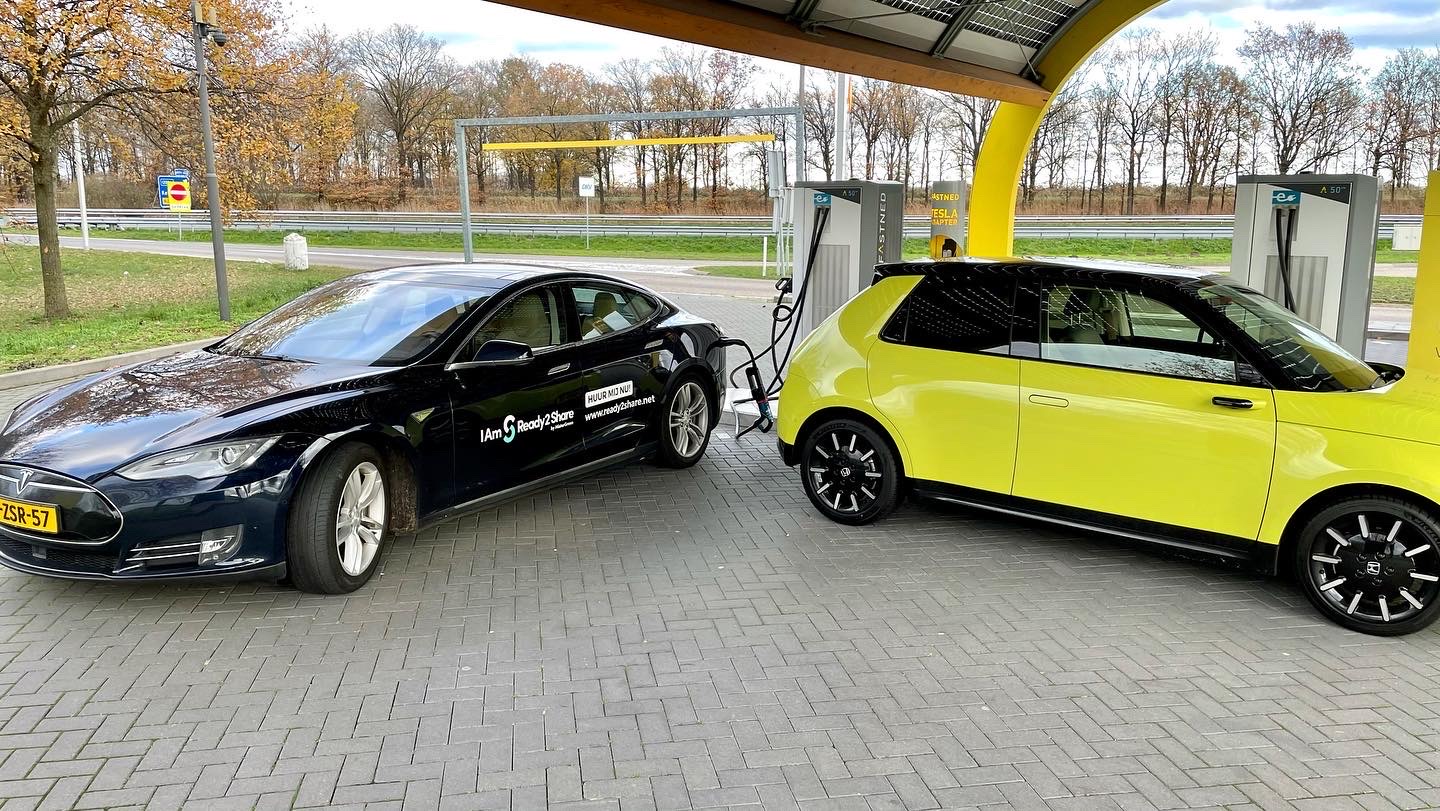 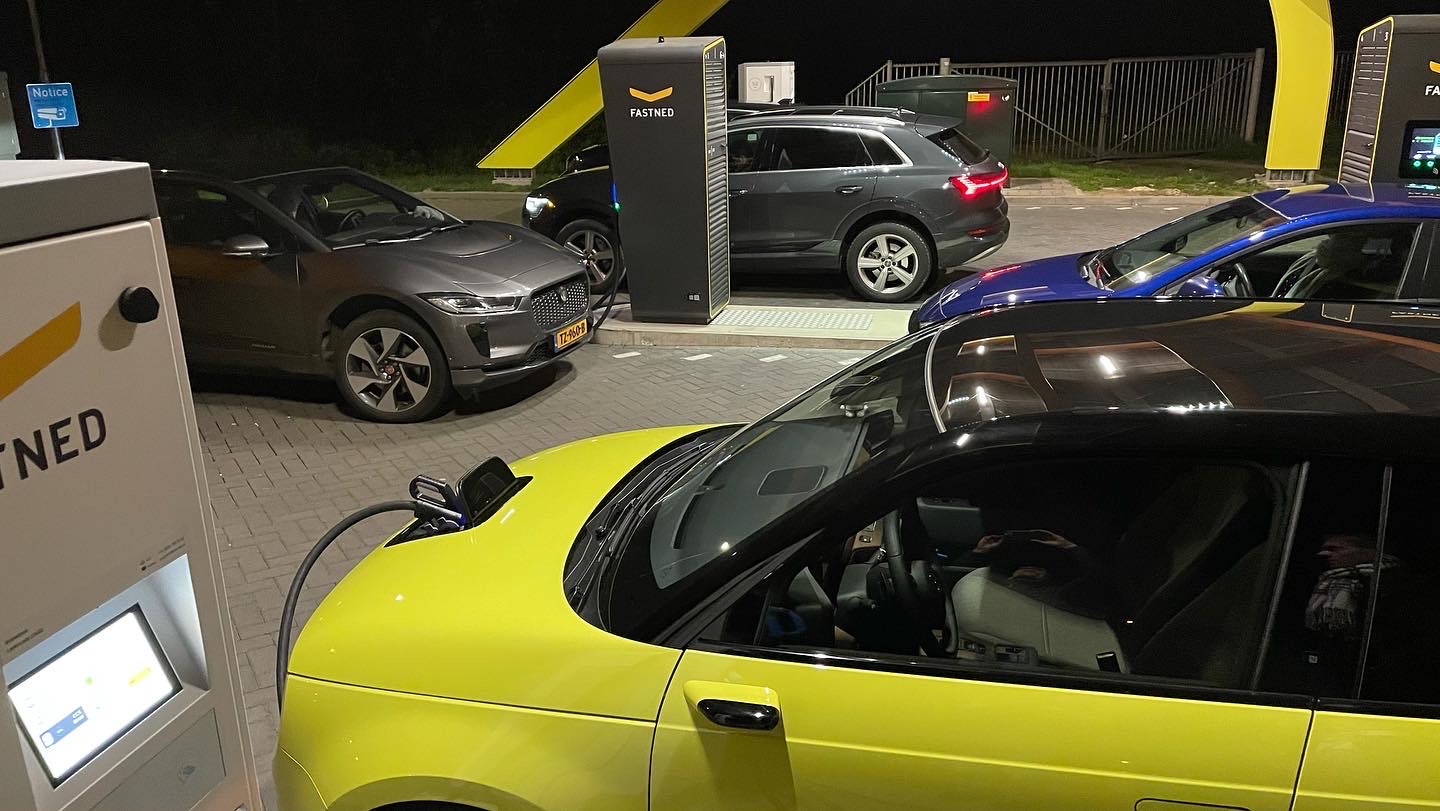 Our Honda E Forums are free to join and open to all.